It has been proven that first aid skills save lives.

For example, a recent statistic from St John’s Ambulance showed that 140,000 people in the UK die every year from incidents where first aid might have saved their lives.

As a business owner, it is important to ensure that you have qualified first aiders on your team so you comply with HSE (Health and Safety Executive) regulations, and also to make sure you have the appropriate skills and training on hand to cope in case there is an emergency.

Here are 5 of the essential first aid skills you need to have covered.

If there is one first aid skill you should learn, it would undoubtedly be CPR.

When we teach people how to do CPR, we really try to communicate to them that it may not be a co-worker you do it on. Cardiac arrests (SCA) can happen anytime and anywhere, so it could be a family member or friend that requires your help.

What is cardiac arrest? In simple terms, it’s when someone’s heart stops. The heart may still be moving (for a short period of time) but it won’t be beating. This is the reason we perform CPR.

Blood needs to be moved around the body, and in particular, the brain needs to be perfused with oxygen. In addition, if there is an electrical fault with the heart, CPR will hopefully maintain the electrical conductivity of the heart, keeping it in a rhythm that a defibrillator can shock.

If we are being brutally honest, the odds are stacked massively against you. And if it gets to the point where someone has stopped breathing and is in cardiac arrest, things are pretty serious.

There is hope though, as people do survive.

In these cases, their survival is largely attributed to the actions of bystanders who recognise the situation for what it is, call for help, provide good quality CPR – and if possible, defibrillation.

When the Ambulance Service arrives, they can provide Advanced Life Support, and apply definitive medical care to the patient. 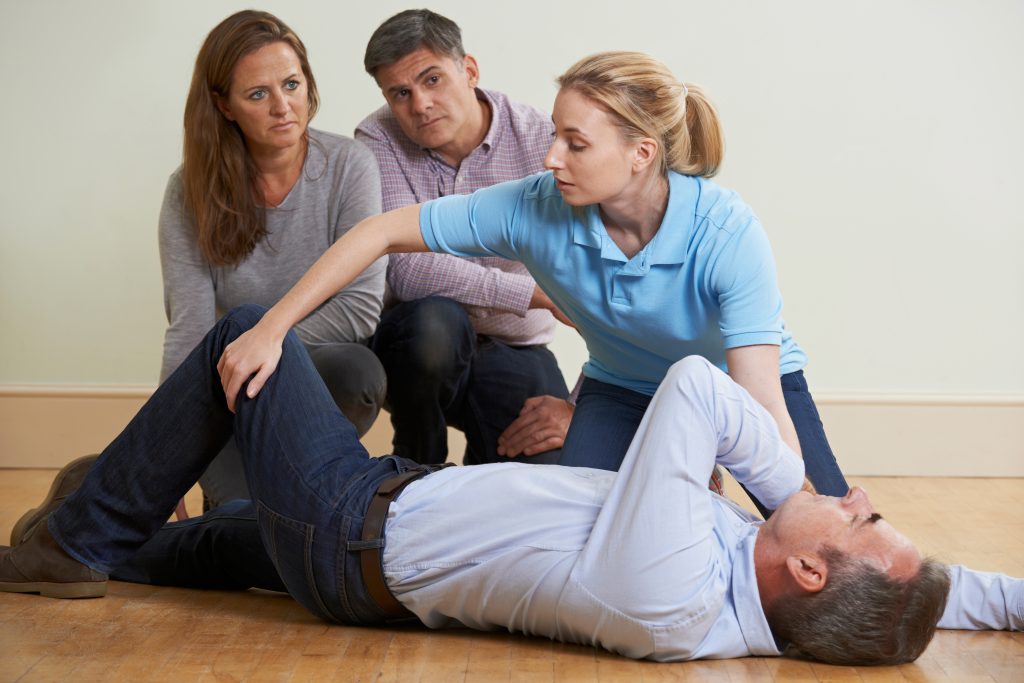 Simple first aid skills can save lives, and the recovery position is an example of that. By rolling someone onto their side we help maintain an airway.

We often hear the airway referred to as the ‘windpipe’. It’s the route that air takes to get in and out of your lungs, and this includes oxygen, which is integral to life.

When is the recovery position used?

It’s used when people are unconscious and breathing normally. If we leave unconscious people on their back, they are at significant risk of having their airway compromised by two things: their tongue, and the contents of their stomach.

The human tongue is anchored to the lower jaw. When someone is unconscious, all the muscles in their body relax. This includes the tongue, which is also muscle.

As the tongue relaxes, it rolls over the entrance of the larynx, which means that the person in question won’t be able to breathe. If this happens, they asphyxiate, and if left, this will lead to cardiac arrest.

The other issue with leaving an unconscious person on their back, is that they may regurgitate. This occurs because the small valve that keeps food in the stomach to be digested also relaxes, which allows anything within the stomach to transit up the oesophagus.

This then poses a significant problem, because when stomach contents pool in the upper airway, they can then be sucked into the lungs as the unconscious person takes a breath.

If this continues to happen, the casualty will drown on their stomach contents.

3) How To Deal With Choking

There are approximately 66 million people living in the United Kingdom.

Most of us eat every day, and normally more than once! What this means, is that there is a possibility someone around you may choke.

High-risk groups include anyone with a physical or learning disability, small children, babies, and elderly folks with conditions such as dementia.

Choking occurs when something – normally food – gets stuck in your airway. At the back of your mouth is a flap of cartilage called the epiglottis. When you swallow, it covers your airway, which allows food to fall into the oesophagus and down into your stomach.

When you speak, you breathe, which means your epiglottis is not covering your airway. If you happen to be speaking at the same time as you eat, you may choke.

So here’s a bit of advice; don’t talk with your mouth full!

4) How To Stop Someone From Bleeding

There are a lot of first aid myths about what you should and shouldn’t do if someone is bleeding, and we find it scary when people tell us they haven’t been taught about this topic on previous courses.

There are a variety of ways to stop someone from bleeding – it all depends on where the injury is, the size and shape of it, and most importantly, whether an artery or major vein has been affected.

The key to stopping someone from bleeding is by educating yourself on the subject and having the right kit to deal with the problem.

Well, at Cornwall Training & Consultancy we can show you what to do and give you the tools you need.

This is easier said than done. The default setting for most people in emergencies is to panic.

So how do people learn not to panic?

If you watch how soldiers react to incoming fire, it will be very different to how unarmed, untrained civilians would behave.

What enables soldiers to respond to incidents in this way is training and repeated exposure to the situation. You can relate the same idea to the emergency services.

But the tricky thing about first aid is that most first aiders in the workplace don’t get much – or any – exposure to incidents (which is a positive thing) due to good risk management.

So our advice to anyone with regards to staying calm in emergency situations is to learn your guidelines, learn the methods, and know the correct procedures to follow.

Knowledge is power! And while you may still be nervous, the information will be there in your mind, ready to come out without you realising.

No products in the cart.
£0.00 Cart
Copyright © 2020 QUAY Magazine | Managed and Designed By Quay Media Ltd | Based in Torbay, supporting the UK