Alex: Hi Nate, hi Rachel, what can you tell me about Geek Retreat?

Nate: Geek Retreat is a nationwide franchise that started in Glasgow as a cafe and gaming shop to give people a place to go as a kind of ‘second home’. Since it proved to be such a popular model, it was then rolled out as a franchise.

Rachel and myself are the owners of this one. It’s very much a local shop – it’s not a franchise in the sense of a massive corporation, so lots of decisions about the events we’ll run and the products we’ll be stocking will be made in-store, and we’ll be very much influenced by the community and the area, so if the community are desperate to play Warhammer in here, we will run Warhammer, and if there’s a huge Yu-Gi-Oh! following we will do that too.

Alex: Great. So my next question is: what made you both want to set up your own Geek Retreat store?

Rachel: It was always me and Nate’s go-to conversation, that we could do coﬀee and we could do board games, and we could take what we really enjoy in our spare time and turn it into our vocation.

It was always a bit of a pipe dream without a model behind us, but then Nate noticed something on social media about opening a Geek Retreat store, and he had a conversation with the head guy just to see if it was the right fit for him.

Rachel’s got a background in mental health and public health and wellbeing, and honestly, the franchise model gave us enough confidence to pull the trigger. We also love the idea of being a community centre, and of serving people nice coﬀee and making them awesome milkshakes, because the milkshakes are awesome.

Rachel: They are incredibly tasty!

Nate: And while the name Geek Retreat sounds a little exclusive, it won’t be like that at all because we’re going to cater to people who self-define as geeks.

I have this challenge that whoever walks in the door, I will find them a game that they will enjoy, and I think we can get people socialising in a structured, friendly manner where if you don’t want to talk to anyone else, you can just look at your cards, or you can think about your next move.

But if you do want to talk to people, there will be others there with the same interests that you’ve got, so the board games – and all the other games that we will be providing – will have a massive social aspect, but almost as a by-product.

Alex: I know you’re keen to start holding events in this space, so what kind of events do you plan to hold at the store?

Rachel: There’ll be a flexible Saturday night that will be a bit of a mix of things.

Nate. Yes, Saturday nights are going to be more diverse, so that’s going to be anything from murder mysteries, because we like the idea of running murder mystery evenings, quiz nights – which will have a geeky theme sometimes, but will also be a normal quiz night on other occasions – all the way up to furry meet-ups, cosplay meet-ups, geek singles night, and also the morning/afternoon/afterschool groups.

We want to run a chess club on a Wednesday morning too, and to have parent and toddler groups… Mini Geeks And Guardians!

Since we’ve got a two-year-old, we’re going to have a box of toys, and we’re going to run a Saturday morning Pokemon club for kids, and a Pokemon Survivors Club, which will be the parents of said Pokemon children sitting down drinking coﬀee!

Rachel: We’ve also had quite a lot of interest from the community voluntary sector about using the space for people who are feeling lonely and isolated, so we’ll advertise that too.

Nate: And we’ll have an over-fifties morning which, again, won’t be exclusive – it’ll just have discounted tea and coﬀee and cakes and things for the over-fifties. That’s another opportunity for people to come and know there’s a safe space if they fancy going and having a chat with someone.

There’s a lovely guy who helps us plan our events, and one of the things he says quite often is that Geek Retreat is a place where people come to meet their best friends, only they’ve never met them before.

So people may come in because they fancy playing Dungeons & Dragons and they’ve never really had anyone to do it with before, but after two months of coming along, they’re sitting opposite their new best friend, and I think that can happen with all our events, really.

Alex: Great. My next question is that I see you’ve partnered with the National Autistic Society, can you tell me a bit about that?

Nate: In its most basic form, we will be running an Autism-Friendly afternoon slot where we turn the music oﬀ, we try to dim the lights, our staﬀ will be hyperaware that it is the Autism-Friendly time – and lots of the people we’ve been interviewing actually seem to have backgrounds in dealing with individuals with behavioural issues and autism, so we will have those skills in-house anyway, but I think partnering with the National Autistic Society gives us some extra support.

I’ve also met with CLIP, who are a group based in Paignton whose job it is to enable people with autism and other spectrum disorders to further their life prospects. They’re very keen on having people coming in and volunteering in the shop, so we’re probably going to have staﬀ that are on the spectrum.

I suppose for us being Autism-Friendly is about having an acute awareness of what autism is, how it can manifest in a thousand diﬀerent ways, and how dealing with people on diﬀerent parts of the spectrum can be very diﬀerent.

Rachel: And also if any of our staﬀ become concerned that they don’t have the skillset to deal with certain people at certain times, then we’d look to train them up and make them feel comfortable. I don’t believe in not enabling people in that way. We want to look after our staﬀ as well.

Alex: Just a couple more things: my next question is, do you have any big plans for the future?

Nate: But in a more utopian sense, I would love to be running games championships.

There’s a Geek Retreat in Exeter, there’s a games shop in Newton Abbot that isn’t a Geek Retreat but which is very welcoming, and there’s Idle Games in Paignton. There is a range of other groups of people who get together and play things like Magic: The Gathering and board games and all the rest of it.

We have the space here to host tournaments and we work with Konami, Yu-Gi-Oh!, Magic: The Gathering and others, so hopefully we will be an oﬃcially sanctioned tournament location. The Geek Retreat model lends itself to doing that.

Alex: Perfect, that’s great. The final thing is, if people want to get in touch with you, what’s the best way?

We’ve got groups set up for individual things, whether it’s if you love films, or you like Pokemon, or cosplay, or whatever else. We have a group for each community, so there are places where you can immediately begin making connections with people.

You can also drop us an email at torbay.manager@geek-retreat.com.

Alex: Just to wrap things up, is there anything else you’d like to say to our audience?

Nate: We want to be a place where people can meet, eat, shop, and play.

Alex: Great! Thank you both for speaking with me. 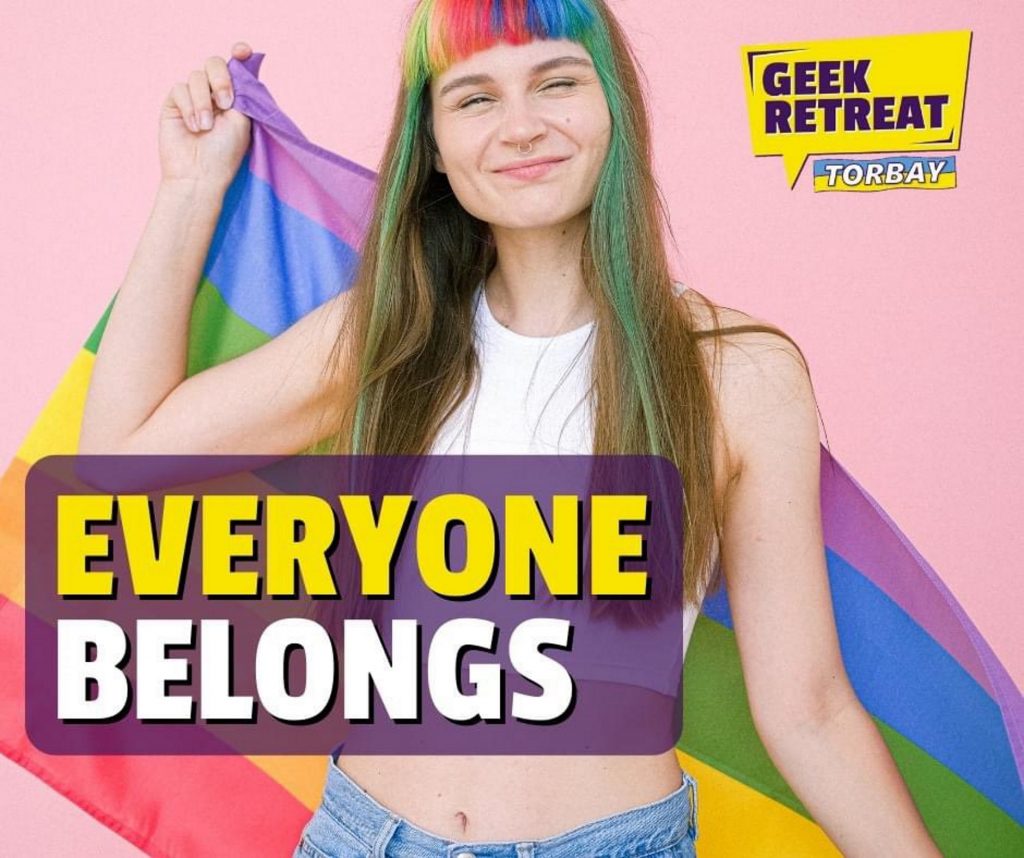