Mike Trower’s Cooking With Cody and Double Decker Diner projects have captured the hearts and minds of a substantial audience.

From being a single father of two young children relying on food banks to feed his family, Mike grew a YouTube channel featuring instructional videos on how to cook nutritious meals from basic ingredients, into a fully-fledged brand that helped families with limited resources to feed themselves and gain the nourishment they require.

As Mike’s platform grew, so did his ambition, and soon he had a bold new vision for how he could help more people right where they need it most.

The dream was to create a mobile cookery school which would travel into disadvantaged areas, so Mike could hold workshops and cooking classes with local families to show them first-hand how to live healthier lifestyles by cooking nourishing meals from scratch – even when working with basic items.

Mike’s community came through for him, and after a successful crowdfunding campaign, a double decker vehicle was secured which would become the home of Mike’s mobile cookery school. With an eager team behind him, all keen to crack on with bringing his vision to life, the future seemed bright and the vehicle was going to be on the roads by Spring 2021.

But then disaster struck.

Within a few days of Mike receiving the vehicle, vandals smashed five of its windows to pieces, along with destroying both wingmirrors and the windscreen wiper. The repair costs would reach £3000, meaning Mike had to appeal to the community again – and again they delivered.

So outstanding was the response Mike received, his Double Decker Diner project has been able to grow in scope once more. Now, Mike has the resources to do far more than simply repairing his existing vehicle; instead, he can purchase a bigger, better, more modern, and more functional one.

In short, Mike and his team have the exciting opportunity to turn a setback into a time of huge expansion.

The purchase of a better vehicle will provide Mike with amazing new opportunities, such as the ability to host events within the double decker. This can help him reach a bigger audience and appeal to more people, as he will have more to offer the communities he takes his mobile cookery school into.

There will also be the possibility to rent the vehicle out to other organisations, who could use it to host their own events, workshops, and classes. All this will help to secure the long-term viability of the Double Decker Diner project.

Updating the vehicle so it can do all this will take resources, which is why Mike’s crowdfunding campaign is still active.

There’s no doubt these are challenging times, but if you’re able to make any donation, no matter how small, to help pay for the upgrades to Mike’s double decker, he and the rest of the Cooking with Cody team would be eternally grateful.

You can donate by using the link below:

Due to how much the scale of the Double Decker Diner project has grown, Mike and his team have decided to make it more separate from his work with Cooking with Cody, and will be launching new social media feeds in early 2021 which are specifically dedicated to the mobile cookery school.

Article By: Alex Belsey and Cooking With Cody
Photography By: Poppy Jakes 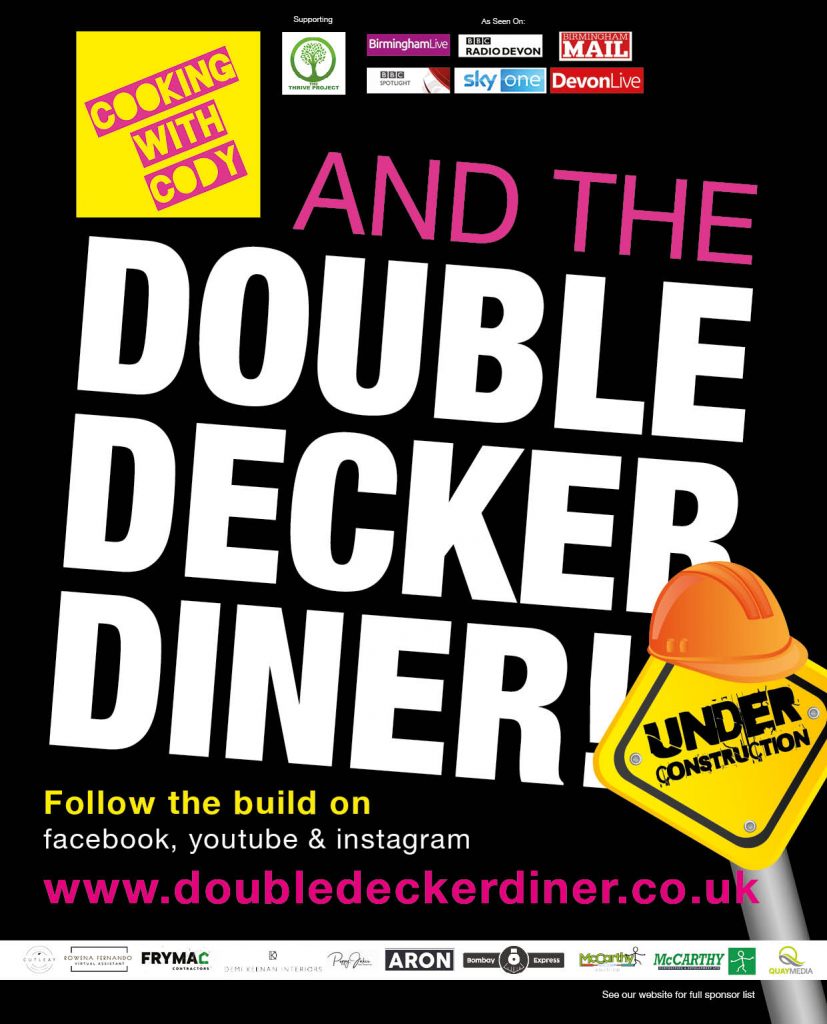