Hayley: Hi Hannah, can you tell me a bit about yourself and your business?

I’m a huge rock and metal fan who just happens to be a trained professional choreographer and dancer. This puts me in the perfect position to be a fitness professional who gets people fit and sweaty to the kind of music that gets my blood pumping.

Which is where RockFit comes in!

The music generally played in most gyms and fitness classes just didn’t do it for me. My friends would point-blank refuse to come to my fitness classes because the music wasn’t to their taste – and I can’t blame them! It wasn’t to mine either.

I quit teaching in 2015 and decided to combine my skillset with my passion for rock music by creating RockFit; an amalgamation of rock-based dance fitness and body sculpting for those who like their music heavy and their fitness classes more like Rammstein than Rihanna.

Hayley: What made you start your business, and what are you trying to achieve with it?

Hannah: Not to sound like Liam Neeson in Taken, but I’ve got a very particular set of skills, and when I quit teaching I wanted to do something that was more than just a job.

I wanted to combine everything I love into one class: rock music, dance, choreography, fitness, and that feeling of being at a gig!

There was a niche in the market; there were no classes for rock and metal fans – plenty of Latin, club music, and chart music, but no rock. Being a choreographer, I thought if anyone could choreograph dance fitness to Metallica, it was me!

Initially, I just set out to create classes that people would enjoy here in my hometown of Plymouth, but RockFit became so popular in such a short space of time that I immediately had to expand.

As such, I had to get more instructors involved, which meant holding training courses across the UK.

A huge community sprung up around the classes, and the potential for RockFit to be an international brand was evident.

My main goal has always been to give people who love rock music, and who have a desire to get fit, a class where they feel they belong. Where the music is loud, the atmosphere is welcoming, and you’re dancing with a bunch of the most amazing misfits you’ll ever meet! 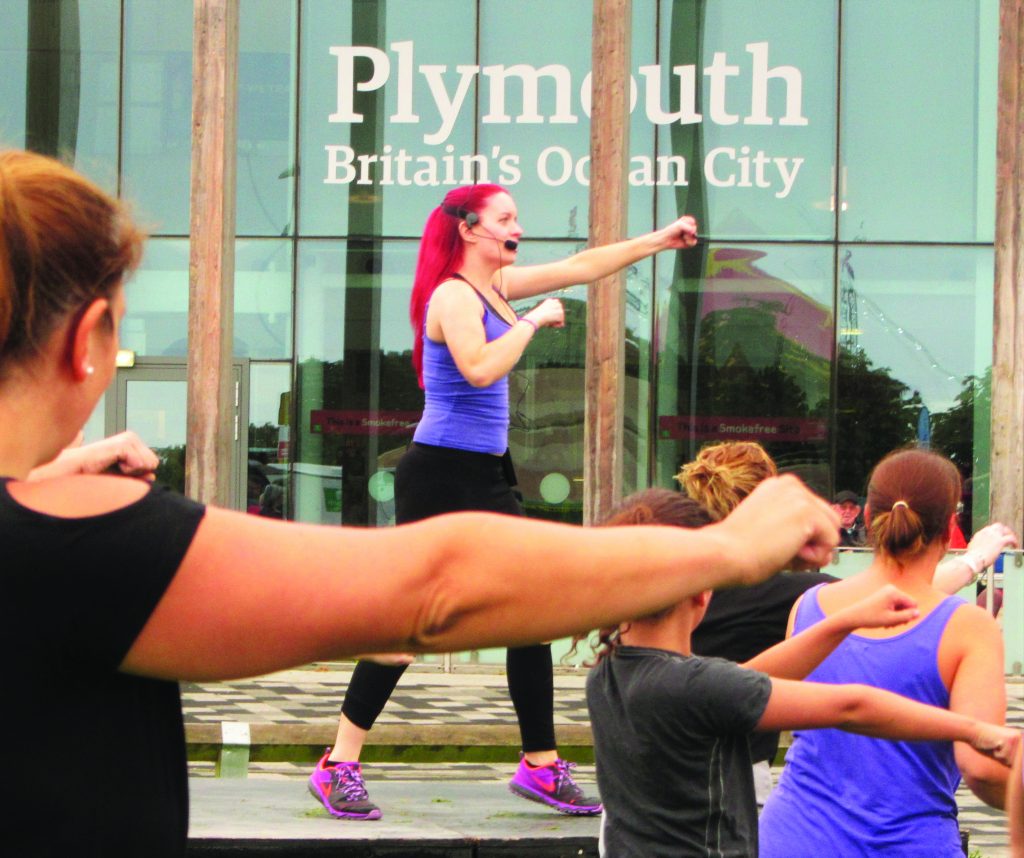 Hayley: Do you have any big plans for the future?

My plans evolve constantly – I’m such an excitable person. I’ll go off on a tangent and end up planning a UK-wide flash mob or a trip to the US. Sadly, COVID-19 has put these plans on the backburner…for now.

Most company CEOs are content sitting behind a desk, but I prefer to be where the action is, and where I can respond to what people want from my classes.

My plans are usually a response to demand from our members (or ‘Rock-Warriors’ as we call them). I’m currently planning our first big RockFit convention, as well as trips to America, Germany, and our next big flash mob.

We can’t wait to get back to Download Festival in 2022 and will hold a big meet-up at our class there.

And all this is before we even get to my online plans!

Hayley: How have you been affected by the COVID-19 pandemic and resulting lockdowns?

Hannah: Initially (like so many businesses), I was out of work – watching my bank account drain and wondering how I would survive.

Fitness classes were one of the first things to go, so all our classes closed immediately. My UK instructors were devastated, but we had no choice.

I had 2 options: either sit there crying into my trainers, or adapt.

So when my partner Adrian (who happens to be a top-notch graphic designer) and his friend Jonathan of Warracks Web Design suggested we take the classes online, I jumped at
the chance.

I’d been toying with the idea for ages, and with everyone being furloughed it was the perfect time! There was already a lot of existing demand.

Armed with a camera and using a friend’s garage, the online classes were up and running by May, and immediately we had 200 people sign up from all over the country.

We’ve gained national attention, being named Best Dance Brand 2020 at the Community Fitness awards, and The Guardian featured us in February!

Instead of falling into bankruptcy, RockFit has grown on an unprecedented scale as rock fans in lockdown joined us for their fitness fix.

Hayley: Is there anything else you’d like to say to our audience?

Hannah: Fitness is changing! It’s no longer ‘one size fits all’.

There’s so much variety out there now. It shouldn’t be about conforming to what we’re shown in the media, and it’s not about being a super skinny ‘gym bunny’ anymore… unless that’s what you want of course!

Also, fitness classes shouldn’t be a punishment – they should be fun and something you want to go back and do again and again. So find something that appeals to you and go for it.

You’ll not only improve your fitness, but you’ll probably find your tribe. And in our case, gain a whole new social life with amazing people too!

If you’re a rock fan looking for a class that caters to your taste in music and is inclusive, non-judgemental, suitable for all, and encourages you to rock up in your band t-shirt, then we’re here for you! 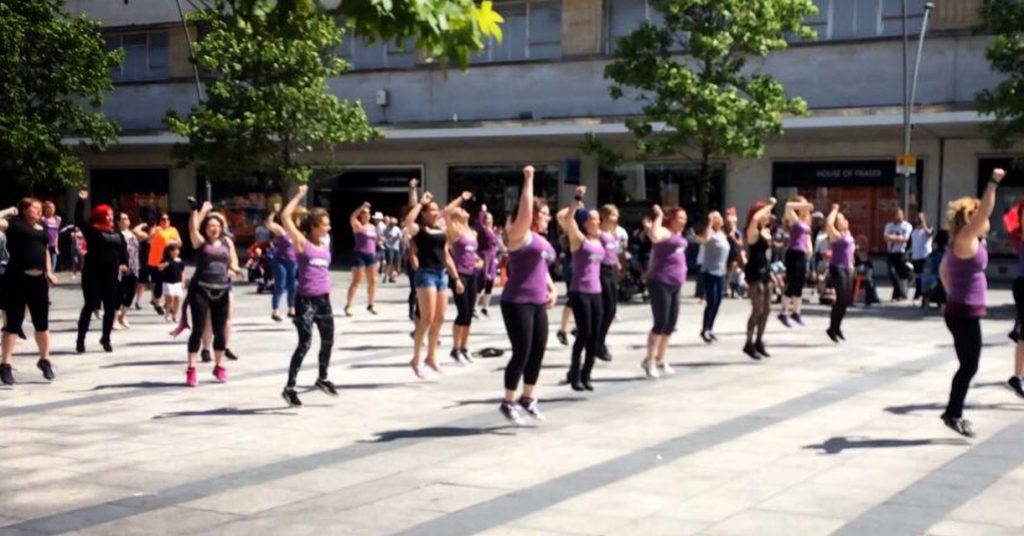 Hayley: How can people get in touch with you?

For more information, or to sign up for our online classes, just head over to our website at www.rockfit.org.uk and we’ll see you online! 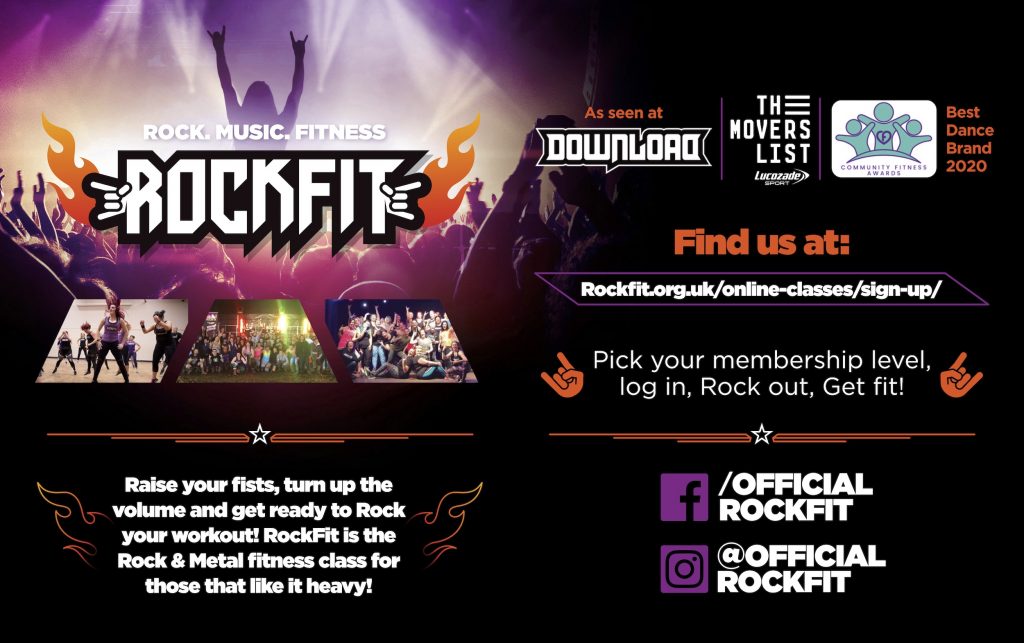